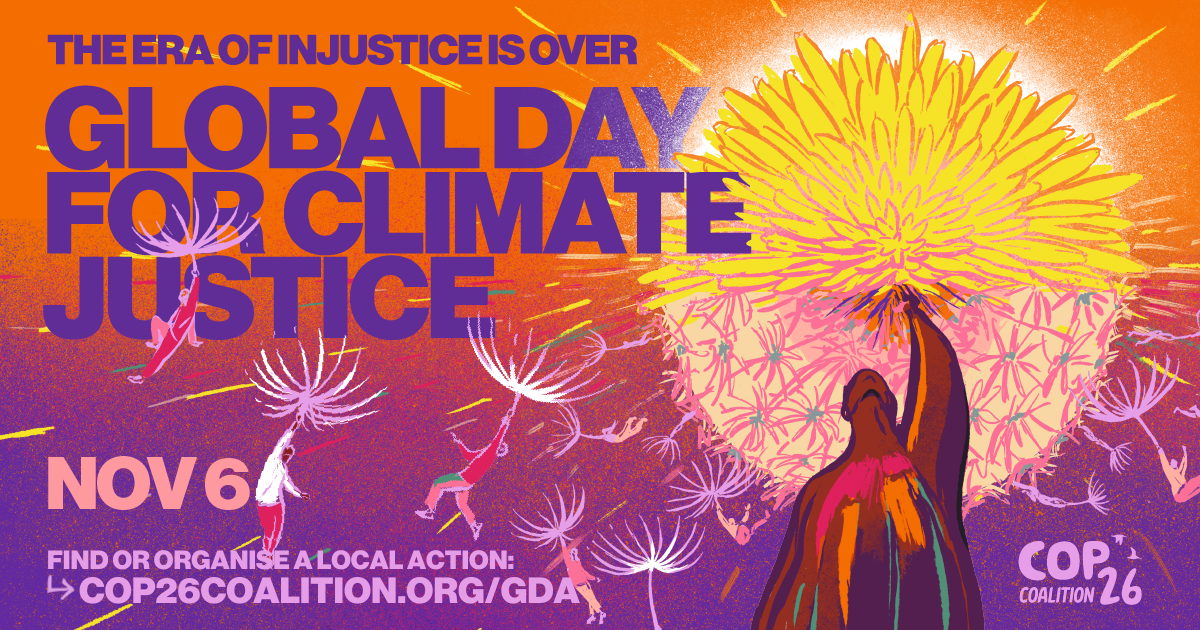 On 6 November 2021, as the world meets in Glasgow for the COP26 Global UN Climate Summit, towns and cities across the world will take to the streets to demand global climate justice.

With 40 local hubs up and running across the UK, today the COP26 Coalition is proud to announce 15 UK locations have confirmed they will simultaneously take to the streets this November 6th to demand urgent and meaningful action on climate at the UN Climate Summit this November.

Major mobilisations are planned for London and Glasgow. In Glasgow, for the flagship march of the Global Day of Action, the crowd will assemble at midday at Kelvingrove Park, before marching to Glasgow Green for a rally at 3pm. The march will be led by indigenous groups and communities on the frontline of the climate crisis, followed by a migrant justice bloc, bringing Scotland’s strong migrant justice and anti-racist movements to the streets in solidarity with the Global South.

Stuart Graham of the Glasgow Local Hub and the Glasgow Trade Union Congress said “Glasgow has a proud history of working class resistance and is a city which is not afraid to take on the establishment, from the Red Clydesiders of 100 years ago, the Upper Clydeside Shipbuilders work-in of 50 years ago, to 2021’s Kenmure Street action which resisted UK Home Office dawn raids. This November climate activists will stand shoulder to shoulder with trade unionists, community groups, anti-poverty and anti-racist campaigners and the rest of civil society to demand climate justice.”

Meanwhile in Central London, the march will set off from outside the Bank of England, ending with a rally at Trafalgar Square.

Camille Barbagallo, organising London’s Day of Action said: “London’s financial district is the engine room of the climate crisis. It is destroying working class communities across the globe, and owes them a huge debt. At COP26, we need to see those debts finally settled. Join us outside the Bank of England as we come together to put a spanner in the works!”

In light of the COVID-19 pandemic, the Global Day of Action is being designed so that everyone who wants to take part, can. Simultaneous satellite demonstrations are confirmed in Nottingham, Chichester, Manchester, Cardiff, Bristol, Oxford, Newcastle, Leeds, Truro, Swansea, Sheffield, Birmingham and Plymouth, while people will also be able to take part in actions at home.

Martin Empson, from the Manchester COP26 Coalition Local Hub said: “Manchester was where the industrial revolution really kicked off. In mills and factories across the city, the first carbon capitalists began the creation of a world economy reliant on fossil fuels in pursuit of massive profits. On the 6th of November, we’ll be joining the Global Day of Action in Manchester to demand a new sustainable economy, and climate justice for those who are already suffering from this legacy.”

The COP26 Coalition is working hard to ensure all COVID-19 precautions will be in place, with stewards encouraging attendees to distance, wear a mask and test before coming.

Quan Nguyen from the COP26 Coalition said: “The decisions made at COP26 will shape how governments respond, or not, to the climate crisis. They will decide who is to be sacrificed, who will escape and who will make a profit. This conference is happening at a crucial moment in history. Across the world and across movements, we are seeing a new wave of resistance, global solidarity and grassroots organising.

This November, we will take responsibility for our collective wellbeing by putting in place COVID-19 precautions so we can safely take to the streets and demand real action on climate change be taken at COP26.

This is a unique opportunity to rewire our system as we recover from the pandemic. We can either intensify the crisis to the point of no return, or lay the foundations for a just world where everyone’s needs are met.”

About the COP26 Coalition

About the Global Day of Action